When we obsess about what might possibly happen in the future, our imaginations can easily push us off the edge and into deep waters. Thoughts like these are so prevalent in modern society that psychologists have given them a name: awfulizing.

Cognitive psychologist Dr. Albert Ellis, the pioneer of Rational Emotive Behavior Therapy (REBT) in the 1950s, first coined the term to describe the act of escalating a situation into the most negative possible conclusion, often with no concrete evidence to prove its validity. Dr. Ellis theorized that adversity or events alone don’t cause people to feel anxious or upset. Instead, you get the most worked up over beliefs or preconceived notions about the potential consequences of the negative event. In other words, you don’t fall into despair because you’ve made a mistake at work; you get upset because you start worrying about how that mistake could get you fired.

For example, whenever I used to see the number of my daughter’s school come up on my phone, I would immediately wonder if she was bleeding or injured. But it was almost always about something innocuous, like forgetting to sign some bureaucratic form. Now I get the same anxiety running through my body whenever I see a call come in from my 90-year-old mother-in-law’s house.

Anthropologically speaking, we can’t help these self-defeating thoughts and behaviors, and even the most optimistic of us can fall in to the awfulizing trap. That’s because it’s evolutionary: Our prehistoric ancestors developed rapid and intense reactions to negative stimuli because such events often were a matter of life and death. This impulse was a subconscious physical response that was essential to survival. We, of course, are the descendants of those folks who were particularly good at this. (The others were eaten.) As such, our physiology is designed to draw us strongly toward the negative—apprehension, rage, pessimism—whenever we feel even mildly threatened.

On the other hand, positive stimuli didn’t require early humans to expend nearly so much energy. (Nobody saw berries on a bush and excitedly shouted, “BERRIES!!!”) According to research by P.C. Ellsworth and C.A. Smith in their study “Shades of Joy: Patterns of Appraisal Differentiating Pleasant Emotions,” we inherited a slow, diffuse, almost lackadaisical response to the good things in life.

As a society, we have moved from pervasive physical threats to emotional ones. It’s these “bad” impressions that begin to control our mind and body. In the paper “Bad Is Stronger Than Good” from the Review of General Psychology, psychologist RF Baumeister explains that bad emotions, bad parents, and bad feedback have more impact on a person than good ones. We also strive harder to avoid bad self-definitions (“She’s lazy”) than to pursue good ones (“She’s hard-working”).

Here’s why it matters: Research shows that awfulizing situations can lead to lower productivity, limited creativity, and more overall stress and anxiety in the workplace. When we begin to awfulize or feel threatened, the amygdala, which is an almond-shaped mass of gray matter in the brain cortex, triggers our fight-or-flight response. Our body responds as though we are experiencing an actual threat, whether it’s real or not.

The phrase “I’m so mad I can’t see straight” is literally true: Our vision narrows, our muscles tense, and higher-order thinking goes out the window. In situations that are only mentally threatening, this extreme focus does not serve its primordial purpose and can take a toll on your energy, focus, and physical well-being. Your worried mind kicks off visceral feedback and leads to actual symptoms from your nervous system. Think sweaty palms, racing heart, and a pit in your stomach.

You don’t have to leave your feelings up to fate. We can rewire our brains to diffuse the awfulizing bomb and better cope with emotional challenges. It’s worth it to put in the work to fight the negativity: “Positive emotions may not have a memorable impact in the moment, but over time, the cumulative effect of positivity can lead to longevity, marital happiness, and workplace success,” says psychologist Barbara Frederickson in Open Hearts Build Lives. “Put simply, positive emotions widen people’s outlooks in ways that, little by little, reshape who they are.”

Building resilience has been proven to help tame these anxiety takeovers. “People learn to adjust their emotional reaction appropriate to the situation,” Fredrickson says.“They know how to calm the mind, cool the immediate physiological impact on the body, and recognize that the worst-case scenario is far from reality.”

Here are a few quick tools from Micro-Resilience, the new book I wrote with my co-author (and husband), Allen Haines. You can utilize these tools and techniques to reduce those threat impulses and focus on being your most successful self.

Stop and smell the roses

When you feel yourself getting hijacked into stress, take a whiff of a calming aroma like cinnamon, mint, or lavender. (Find the one that works best for you). “Because your sense of smell goes directly to the deep limbic system,” says neuroscientist and psychiatrist Daniel Amen, “it is easy to see why smells can have such a powerful impact on our feeling states. The right smells likely cool the deep limbic system. Pleasing fragrances are like an anti-inflammatory.” And, though you’ve heard it before, Amen also recommends taking a deep breath: A minute or two of conscious, deep-belly breathing (not chest breathing) will help derail the fight-or flight response.

Scientists at UCLA found that when we come up with a name for how we are feeling, we can distance ourselves from becoming consumed with that emotion. Using fMRI studies, Matthew Lieberman found that labeling disrupts the amygdala activity by increasing activity in the prefrontal cortex. For example, if your boss is ignoring you, decide whether you are feeling “unappreciated,” “helpless,” or even “annoyed.” The process of dissecting your emotions will increase your sense of control of the situation. That little shift also allows you to choose a new perspective. If you’re nervous about giving a speech in front of important people, for example, rename your feelings as “excited” or “caring about the outcome.” Separating yourself from your feelings in this way gives you the power to choose a different emotional response.

Once we calm down our initial emotional reaction, we can start to shift the focus away from spiraling into worst-case scenarios (“What if I get fired?”) and instead think about the choices we have that can ameliorate the situation (“I should ask for feedback from my boss”). We can stop feeling trapped, helpless, and angry, and create a more positive energy. This will help turn pessimistic feelings into optimistic ones. When worst-case scenarios play through your head, remind yourself that you’re awfulizing, and concentrate on next steps. 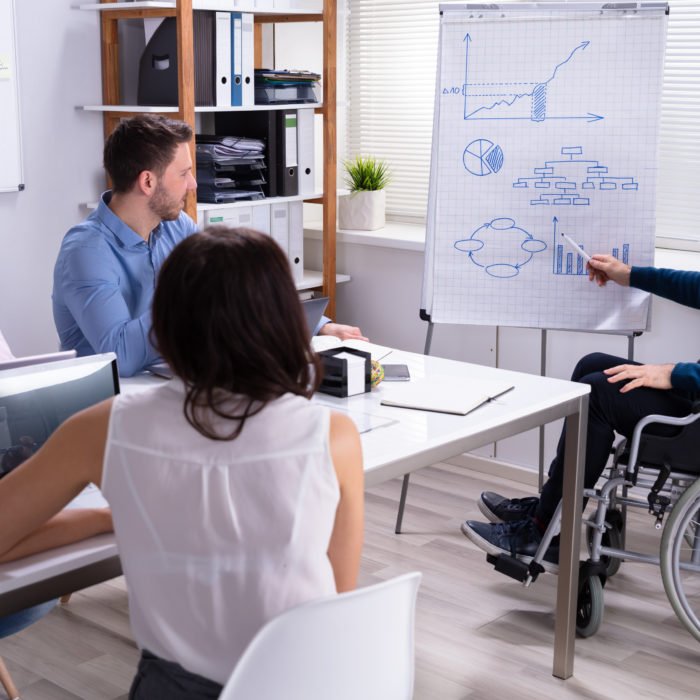 4 Simple Ways You Can Increase Disability Inclusion in Your Workplace

In my work as a Fortune 500 leadership consultant, one of the key issues we address is inclusion — bringing out the best in everyone by making sure their ideas are heard, tapping into their unique talents/perspectives, and creating a sense of belonging. 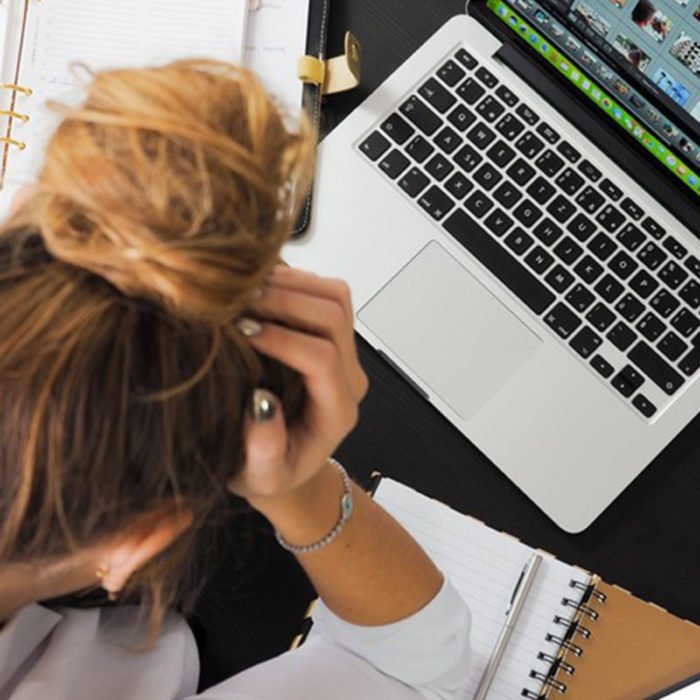 How to Stop Jumping to the Worst-Case Scenario, according to evolutionary psychology

When we obsess about what might possibly happen in the future, our imaginations can easily push us off the edge and into deep waters. 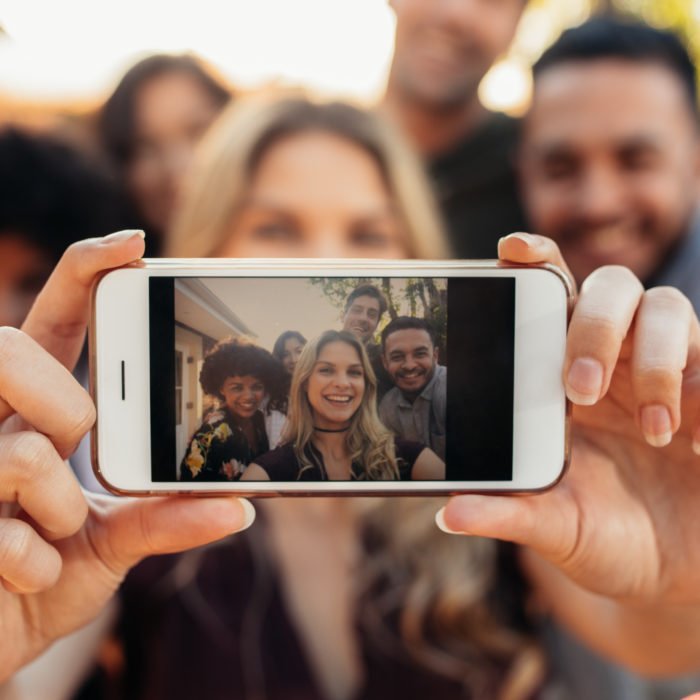 Is Instagram making you feel down? Here’s the difference between looking and feeling extraordinary

Social media is filled with people posting pictures of themselves in luxurious or exotic places, posing at their most flattering angle, and laughing with a gaggle of fabulous people. But we all know it ain’t so.